Crafting When We Can Challenge - Make It Sparkle! 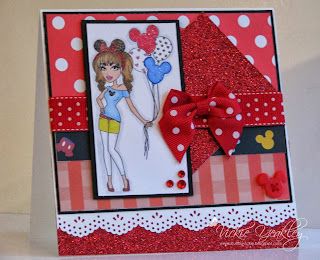 The challenge at Crafting When We Can is to Make It Sparkle!  Sassy Studio Designs is the sponsor; I used the digital image Disney Fan for my card and included lots of sparkle!  Red glitter cardstock was used under the lace punched border and as a layer on the card.  Red gems adorn one corner of the image layer.  The shaped balloons were colored with Copic markers and then coated with distress glitter.  The image was colored with Copic markers and part of it colored in using spicka glitter markers.  I used Disney patterned papers for the card background.

We hope you'll play along with the Make It Sparkle challenge at Crafting When We Can.  The challenge can be found here.