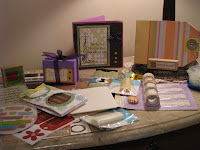 Listen Honey Everyday is a Bonus!

A few weeks ago susiestampr from SCS sent a TOY (Thinking Of You) package to me in which she enclosed a cute card stamped with an American Art stamp (but, I didn't know it was an AA stamp at the time). So, I PM'd Susie, asked her the name of the stamp. I had seen it at Hobby Lobby and was going to send my DH to HL to get it for me, but I knew he would need a visual and name of the stamp. Susie not only PM'd me, she called me and gave me the deets on the stamp and we had a wonderful conversation.

I felt up to going to HL so DH took me, but they didn't have that stamp (the stamp with the sentiment Listen Honey Everyday is a Bonus). But, HL did have about 5 other stamps by the American Art designer Emerson, and they were all marked down to clearance price. But, alas, no Listen Honey stamp. SO, I ordered it and 5 others from the American Art site and they were delivered on Thursday.

Ya' know when you see a stamp and you tell yourself you just gotta have it! That's what it was when I saw Susie's notecard! The quest began! That one little ole notecard became an obsession to me! Thanks so very much Susie for starting me on my quest!

Here's a picture of my collection so far!